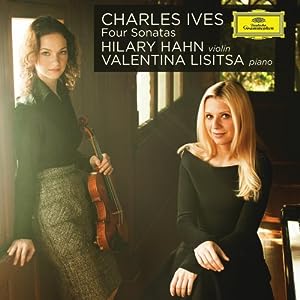 On Hilary Hahn's new album (13th overall, 7th for DG) the vitruoso offers up the 4 completed violin sonatas of Charles Ives, pieces that she'd been performing live in concert for several years with pianist Valentina Lisitsa, who appears on both her first studio recording with Hahn as well as her first on DG.


As one goes through the 4 sonatas, it is evident throughout that Ives "painted" what he saw. The sonatas all contain themes from early-American songs, hymns and spirituals and seem to be inspired by contemporary life and activities in New England. Ives made a very interesting blend of his Americana with the sounds of a movement towards changing tonality in classical music.


The four sonatas are all presented here in their final editions, the first 3 having been revised and re-thought by Ives in later years following the publication of the 4th and last piece "Children's Day at The Camp Meeting", itself the most well-known and shortest of the pieces. I always found the abrupt ending of the 4th Sonata perplexing, yet this piece was Ives' favorite and is the most performed.


Hahn and Lisitsa make a very original presentation on this release, opting for an intimate, dry-sounding recording (at least drier than Hahn's previous classical recordings), and the nature of the pieces, with the sound of early-American themes woven throughout lends itself perfectly to this. The piano part, especially the piano-only sections of the pieces are displayed brilliantly by Lisitsa's broad, sweeping gestures on the piano, having an equal role in what are really duets for violin and piano, and Hahn's violin sings with all the nerve and passion of an early 20th century jazz singer, particularly on the "Need" theme featured in the third movement of Sonata #3


The highlights on the album are the 2nd movements of Sonatas #2 and 3: The 2nd Sonata's Presto (Titled "In The Barn") provides an incredible shot in the arm during an otherwise moody sonata. It was such a joy to see Hahn perform this piece live in concert a few years back. At times she seemed to move almost as if it were choreographed. On the 3rd Sonata's 2nd movement, marked "Allegro", the tempo is pumped fast and steadily by Lisitsa. A somewhat slower reading of this movement was recorded by Hahn herself on a 2008 episode of the NPR series From The Top, where she performed it with Christopher O'Riley, but even with the differences in tempo, Hahn's identity with the piece remains the same.


Ives, having faced much criticism and scorn during his lifetime for his works, didn't begin to get recognition until peers and fellow composers like Aaron Copland, Arnold Schoenberg, and Leonard Bernstein spoke up for him. Hilary Hahn, having championed and re-popularized the rarely-performed Schoenberg Violin Concerto in her Grammy-winning 2008 recording may do the same for Ives’ work, and this could quite deservedly earn her another Grammy nod as well.
Opinion reviews Violin

Has Opera gone for Gore? 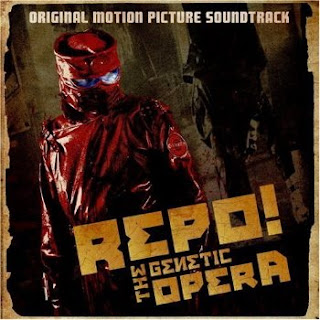 First there was "The Fly" but that was a collaboration of several film folk who worked on the 1986 film version so there is a reasonable connection with why it was done. But now there is "Repo, the genetic opera!" This latest opera is coming out in film version rather than live, so perhaps they are going for the horror film genre rather than the opera crowd, perhaps trying to become a cult hit like the "Rocky Horror Picture Show".The basic premise is in a future where replacement organs can be purchased on a layaway plan—and are bloodily reclaimed from those who can't keep up their payments. The very plot screams for blood and gore (but not necessarily music). In a review of the music by Jimmy O (of Arrow in the HeadNews) he suggests the music has a hard edge, "like something Marilyn Manson should be hissing at you" with moments of real beauty, "into a kind of operatic beauty with Sarah Brightman‘…
Read more