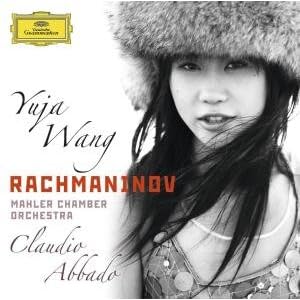 Grammy-nominated pianist joins the legendary maestro in her first orchestral album to be released March 8th, 2011

“Wang doesn’t merely provide listeners with technically dazzling and heart-stoppingly beautiful accounts of the keyboard repertoire, she seems to be redefining what is possible with the instrument.” San Francisco Chronicle

On March 8th, Deutsche Grammophon releases Grammy-nominated pianist Yuja Wang’s first orchestral album with Rachmaninov’s challenging Piano Concerto No. 2. She pairs this seminal work with the daunting Rhapsody on a Theme of Paganini, the composer’s last composition for piano and orchestra and a keystone of his symphonic œuvre. Claudio Abbado joins Yuja conducting his Mahler Chamber Orchestra.

The 23-year-old Yuja Wang, Gramophone’s “Young Artist of the Year” 2009, hearkens to the no-holds-barred pianistic sensations of the 19th century. She has been described as “A pianist of rare gifts” by the Washington Post while the Philadelphia Inquirer remarks “For her, there is no repertoire too steep to conquer. The technique is simply off the charts.”

Yuja Wang has already been presenting the repertoire on this album on stages throughout the world and will continue to perform Rachmaninov in upcoming engagements this spring in Oregon, Maryland, Pennsylvania and California (details below). “Whereas many pianists try to dominate this set of variations,” the Pittsburgh Post-Gazette noted of one of these performances, “she worked with it. This approach simply gave more punch to the places in which the piano should jump out of the texture.” This October, Yuja will embark on a ten-city recital tour that will culminate in her Carnegie Hall recital debut on October 20th.