Showing posts from February, 2014
Show all

Family Day at the Opera

Denver, CO — (February 17, 2014) In collaboration with and sponsored by Arts & Venues Denver, Opera Colorado presents Family Day at the Opera on March 22 at 10:00 a.m. in the lobby of the Ellie Caulkins Opera House. This free family performance will feature anabridged production of TheBarber of Seville sung in English. Performed by Opera Colorado’s 2014 Young Artists, Family Day at the Opera features the professional production of The Barber of Seville that Opera Colorado takes directly into schools and community venues across the state of Colorado. Kevin Taylor at the Opera House will offer family-friendly refreshments and snacks available for purchase in the lobby of the Opera House. Family Day at the Opera includes a short Q&A session after the 50 minute performance, along with hands-on crafts and entertainment. Don’t miss this opportunity to bring your whole family to the Opera and experience the joy of live performance in …
Post a Comment
Read more

Denver – The Arapahoe Philharmonic presents “Classic Traditions” on Friday, March 14, 2014, at 7:30 p.m. with a program featuring Johannes Brahms’ lush Symphony No. 2 and Pyotr Ilyich Tchaikovsky’s Violin Concerto, one of the most popular and technical concertos for violin, with soloist Josiah Hamill, winner of the 2014 T. Gordon Parks Collegiate Concerto Competition sponsored by the orchestra. Maestro Devin Patrick Hughes conducts this fifth concert in the Philharmonic’s 60th Anniversary Season at Mission Hills Church, 620 SouthPark Drive, Littleton. Hughes and Charley Samson, Colorado Public Radio classical music host and Arapahoe Philharmonic emcee, will give a pre-concert talk at 6:45 p.m. discussing the program. Tickets are $25 (adults), $20 (seniors), and $5 (students/children) and are available online at www.arapahoe-phil.org, by phone at 303-781-1892 or at the door.


Jacaranda's 10th anniversary season continues on Saturday, February 22, 2014 with a dinner break — a break that separates the performances of two 20-movement mid-twentieth-century masterworks by John Cage and Olivier Messiaen. Each cycle is played by an American pianist with whom the music has become synonymous: Adam Tendler and Christopher Taylor, respectively. The consecutive concerts (Tendler at 5:00 p.m. and Taylor at 7:30 p.m.) will take place at First Presbyterian Church of Santa Monica, 1220 Second Street, Santa Monica, CA 90401.

Jacaranda’s first decade gave extensive attention to the centenaries of Messiaen (1908-92) and Cage (1912-89). As a nod to that legacy, artistic director Patrick Scott chose for the 10th anniversary two works for solo piano that link the comp…
Post a Comment
Read more

As a highlight of its 40th anniversary season,Kronos Quartettakes the stage in Carnegie Hall’s fabled Stern Auditorium onFriday, March 28 at 8 pm. The one-night-only concert features a world premiere byTerry Riley, and boasts a stellar array of guest artists.ComposerBryce Dessnerof The National will play electric guitar onAheym, the title piece from his acclaimed new Anti- CD of works written for Kronos. Pipa virtuosoWu Man, a frequent partner, will be heard in the New York premiere ofPhilip Glass’sOrion: China. Protean indie-rock composerJherek Bischoffjoins in on electric bass forA Semiperfect Number, which he premiered with Kronos last July at Lincoln Center Out of Doors. 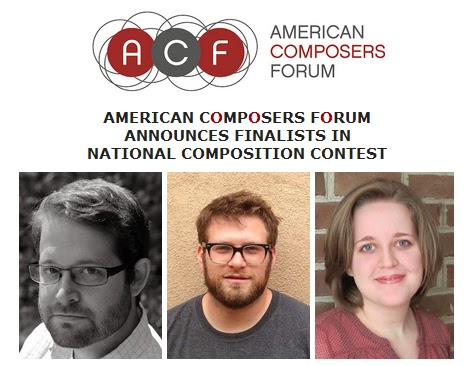 Three student composers are chosen from 250+ applicants
In partnership with the acclaimed new music ensemble So Percussion, the American Composers Forum is pleased to announce the finalists in the 2014 American Composers Forum National Composition Contest: Michael Laurello (Yale School of Music), Todd Lerew (CalArts), and Kristina Warren (University of Virginia). Each finalist will receive a cash prize and be asked to compose an eight- to ten-minute piece for So Percussion. The resulting pieces will be workshopped with the finalists in residence, and premiered by So Percussion on July 20 at Princeton University, as part of the So Percussion Summer Institute 2014. One of the works will be chosen to receive the final prize, which includes an additional cash award and future public performances by So Percussion.