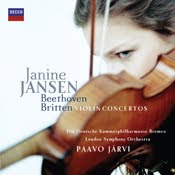 NEW YORK, NY – On September 29th, Decca will release a new recording featuring violinist Janine Jansen fulfilling a long-held ambition to record Benjamin Britten's Violin Concerto alongside the most monumental of all violin works, the Beethoven Violin Concerto. Janine Jansen regularly thrills audiences with both her startlingly fresh interpretations of repertoire staples and remarkable takes on lesser-known works. The Times of London recently put it succinctly that "Whenever a violin repertory piece needs revitalizing, there’s one simple solution. Hire Janine Jansen to play it." Janine records these concerti with two different orchestras to fully explore two very different sound worlds: the Deutsche Kammerphilharmonie Bremen for the Beethoven and the London Symphony Orchestra for Britten. Paavo Järvi conducts both performances.

“To make a recording of the Beethoven and Britten Violin Concertos has been a dream of mine for years. They are two of the greatest concertos ever written — so different yet both so real.” - Janine Jansen

“The Beethoven is the purest and in many ways the most beautiful concerto in the violin repertoire. The giant!” Janine explains. “I felt so intimidated by it at first, perhaps because the general perception is that one can only play and understand this piece when one is older and highly experienced. I first played it at a very young age — I was so over-awed it felt like the longest forty-five minutes of my life — but with time and greater maturity, I have discovered so much depth in this remarkable music.”

Playing the concerto with Paavo Järvi and the Deutsche Kammerphilharmonie Bremen in March 2009 was one of the highlights of Janine’s career to date. “At first I was concerned that my approach was too Romantic,” she recalls, “and that I wouldn’t blend with the orchestra’s style of playing with little vibrato and its wonderfully pure sound. When we played it together for the first time my doubts simply disappeared.”

If the Beethoven concerto occupies a hallowed place in every concert violinist’s repertoire, the Britten is still a comparative rarity. Yet for Janine it is one of the greatest works in its genre and one she has loved and championed since she first played it nearly ten years ago. “I have fallen completely in love with this extraordinary piece and I try to program it wherever and whenever I can,” she beams. “The Britten is technically very challenging for both soloist and orchestra, but the musical language is as intense and expressive as can be — such underlying tension! For me the most impressive part of the concerto is the very end. The coda starts like a prayer and becomes a cry of pain and despair. You can feel how influenced Britten was by the tensions in the world at the time of the Spanish Civil War. After playing the last notes I feel emotionally finished and empty, yet at the same time nourished and filled with wonder.”

Janine Jansen’s passion for the Britten Concerto is evident to all who experience her performing it. Following a performance with Neeme Järvi and the New Jersey Symphony Orchestra in 2005, Bradley Bambarger of the Star-Ledger raved, “Jansen played Benjamin Britten's Violin Concerto with bravura abandon, her hair whipping around and the strands flying off her bow. Just hitting the myriad notes of Britten's challenging score in tune and in time wasn't enough for this risk-taking soloist. She maximized the expressivity of every one, making those notes whisper and sing, caress and sear.”

Central to the success of this particular recording is the special musical relationship Janine enjoys with conductor Paavo Järvi and both orchestras: “What I love about our collaborations is the amazing flexibility and sense of communication, in which we get inspired by each other’s ideas. We make music in, for me, the only possible way. Listening to each other, reacting to each other, being open to new ideas and being passionate about it!”