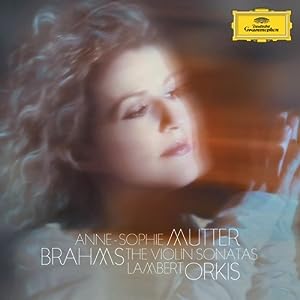 Acclaimed violinist Anne-Sophie Mutter returns to recording chamber music after two highly successful albums devoted primarily to concertos (Mendelssohn and Bach & Gubaidulina) and also returns to Brahms, a composer who has meant much to her over the years. Mutter is joined by longtime partner Lambert Orkis with whom she previously recorded the complete Beethoven sonatas, and the two reveal the musical benefits of frequent collaboration. This new recording will be available October 12, 2010 in both CD and DVD formats.

Anne-Sophie Mutter came across the Brahms Sonatas at age five and a half when she heard David Oistrakh in concert. Soon she was performing the Brahms Concerto and Double Concerto with Karajan and even recorded them for DG in the early 1980s. Now, almost 30 years later, Ms. Mutter returns to Brahms with a different perspective. According to her, “my view of Brahms, my view on anything I play today has changed. I have a deeper understanding of music and, if you want it or not, life does leave its marks not only in your brain but in your heart and in your soul.”

These three monumental works for violin and piano were composed in just under the span of a decade, with the second and third sonatas both composed during the summer of 1886. Each is unique unto itself and evokes different emotions and images: the private feeling of the G major sonata to the sunnier disposition of the A major and the more grand (and demonic) D minor sonata. Mutter and Orkis have played these works around the world for nearly twenty years and now bring their individual and shared life experiences to this recording. As Orkis says, “We’ve learned them, we’ve lived with them, and we’ve played them on various continents together, and we go through life experiences, and now we bring it all to this music. Brahms is a composer who’s not showing off: he’s showing life, beauty, art. It’s wonderful.”