Cantique - The Music of Arvo Pärt 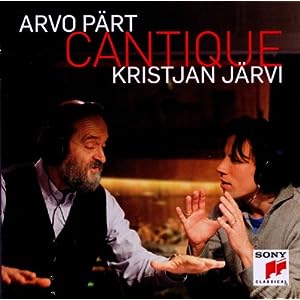 “A kinetic force on the podium” – The New York Times

Sony Classical is pleased to announce a new, exclusive multi-album recording agreement with the dynamic the Estonian-born and American-raised conductor Kristjan Järvi. The new relationship launches with the release of Cantique, featuring the music of iconic Estonian composer Arvo Pärt in celebration of his 75th birthday. Järvi leads the Rundfunk Sinfonie-Orchester Berlin and the RIAS Kammerchor. Cantique includes Pärt’s 1971 masterpiece, Symphony No. 3, plus the world premiere recordings of the orchestral and choral version of his Stabat mater (1985/2008) and Cantique des degrès (1999/2002) for choir and orchestra. The album was produced by Florian Schmidt and recorded at Haus des Rundfunks in Berlin in February 2010.

Cantique represents the culmination of a lifelong friendship between Kristjan Järvi and Arvo Pärt, which has been shaped as much by their shared personal history as their shared musical life. The Järvi and Pärt families have been friends since the 1960s, when Kristjan’s father Neeme Järvi and Arvo Pärt worked together at Estonian Radio – Neeme Järvi as the conductor of the Estonian Radio and Television Symphony Orchestra, and Pärt as a recording engineer. Both families chose to emigrant from Estonia in 1980 because of continuing struggles with Soviet officials, and settled in Vienna within days of each other. Initially, they stayed at the same convent there, which was a stop for refugees. Though the Pärt family remained in Vienna, later relocating to Berlin, and the Järvis moved to the United States, the families have remained close throughout the decades.

Their musical lives have remained intertwined over the years, and have crossed generations. Pärt’s Symphony No. 3 is a major symphonic masterpiece of the late 20th century and is dedicated to Neeme Järvi. In 2008, when Kristjan Järvi was the music director of the Tonkünstler-Orchester Niederösterreich in Vienna, he commissioned an orchestral and choral version of Pärt’s Stabat mater, originally written for soprano, alto, and tenor, with string trio. Järvi premiered it with that orchestra at the Großen Musikvereinssaal during the Wiener Festwochen, with Pärt in attendance. For both men, it was a moving experience to premiere the work in the city to which they both originally came as refugees.

The orchestra – Rundfunk Sinfonie-Orchester Berlin – is one with which Kristjan Järvi has collaborated for more than a decade, and hails from Berlin, Pärt’s home for many years outside of Estonia.