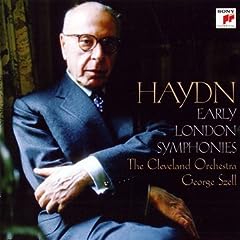 “If I had to choose a single disc of Haydn for my desert island, it would have to be the coupling of (Haydn’s Symphonies Nos. 93 and 94) – irresistible performances in every way.” - GRAMOPHONE on the Szell/Cleveland Haydn recordings (May 1974)

George Szell is one of the most critically acclaimed and revered conductors of the 20th century. He is remembered today for his long and successful tenure as music director of the Cleveland Orchestra and for the recordings of the standard classical repertoire he made in Cleveland and with other orchestras.

Szell came to Cleveland in 1946 to take over a respected, but undersized, orchestra which was struggling to recover from the disruptions of World War II. By the time of his death he was credited, to quote the critic Donal Henahan, with having built it into “what many critics regarded as the world’s keenest symphonic instrument.” Through his recordings, Szell has remained a presence in the classical music world long after his death, and in some circles his name remains synonymous with that of the Cleveland Orchestra.