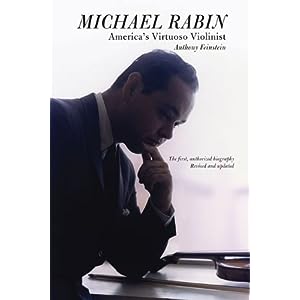 Michael Rabin: America’s Virtuoso Violinist (Amadeus Press, $22.99) by Anthony Feinstein is the poignant story of the life and career of one of history’s greatest violinists.

As a child prodigy, Rabin had the classical music world at his feet. Notable successes included a coveted EMI contract, recording the soundtrack for an Elizabeth Taylor movie, and guest appearances on “The Milton Berle Show” and “ The Bell Telephone Hour.” But, no sooner had Rabin taken his place alongside such illustrious contemporaries as Heifetz, Milstein, and Stern than he abruptly and inexplicably disappeared from the concert stage. For three years, the public saw and heard little of him. In the mid-1960s, Rabin resurfaced and painstakingly began rebuilding a once-great career. Then one morning, in January 1972, the music world awoke to news of his sudden, mysterious death at age 35.

For the first edition of this biography, Feinstein had unprecedented access to Rabin’s private papers and medical history. In this revised and updated edition, he draws on additional material obtained from recent interviews with Rabin’s colleagues, friends, and management. The result is an added appreciation of Rabin’s remarkable family, his cloistered upbringing, and his micromanaged career that ensured not only great success, but also periods of great despair.

More than the story of a great violinist, Michael Rabin: America’s Virtuoso Violinist is also the moving account of a man of rare talent who never stopped battling to find personal happiness on that fragile journey from wunderkind to adulthood.
Books