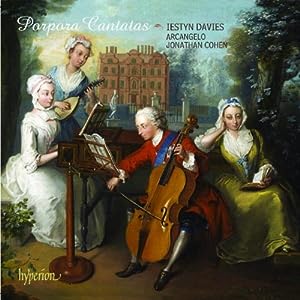 A widely anticipated debut recital at Carnegie Hall on December 15 is among the highlights of countertenor Iestyn Davies’s remarkable autumn, which saw the U.S. release in October of his most recent recording, Porpora Cantatas, a solo album on the Hyperion label that is already a sensation in Europe, and rave reviews for his Metropolitan Opera debut in Rodelinda in November. Named 2010’s Royal Philharmonic Young Artist of the Year and described as having “one of the most glorious countertenor voices in the world today” (Independent – UK), the British singer will perform at Carnegie Hall with pianist Kevin Murphy, recreating much of their Phillips Collection program in Washington, DC, on December 4. At Carnegie Hall they will add the world premiere of folksong arrangements by New Yorker Nico Muhly, alongside works by Britten, Purcell, and Bach. Muhly’s opera, Two Boys, was recently given its debut at English National Opera, consolidating his reputation as an “important artist” (New York Times). The Washington Post raved about the December 4 recital: “It was clear from the first notes, that Davies has an absolutely superb voice – supple, agile, beautifully controlled and effortless throughout its entire range.”

In 2012, Davies will make his first Lyric Opera of Chicago appearance in another Handel role debut, portraying Eustazio in Rinaldo. Directed by Francisco Negrin and co-starring David Daniels, the production opens on February 29.

Davies’s Met debut was a landmark both for him and the company: it was the first time a British countertenor had graced its stage. He brought a “potent and beautifully balanced voice to Unulfo in Handel’s Rodelinda,” said The New Yorker. The Classical Review praised him as “a winning actor … and a beautiful musician, too, negotiating the never-ending runs in Sono I colpi della sorte and the tricky intervals in Fra tempeste funeste with both precision and a delectable lilt.”

The New York Times explained the absence of British countertenors on the Met stage until Davies: “The countertenor movement was born in England, where historically castrati were a high-priced import and [Baroque] composers like Handel were obliged to be fairly flexible.” More recently, a resurgence of interest also originated in Britain, with 20th-century legends like Alfred Deller and James Bowman bringing the male falsetto voice back from church choir obscurity and once more onto the concert platform. In 1988, the American Jeffrey Gall became the first countertenor to sing a major role at the Met, understudying for Marilyn Horne in Handel’s Orlando. Subsequent productions have featured other exponents of the countertenor’s art, yet to date the nation that founded the tradition still remains unrepresented at the Met.
Recording Voice