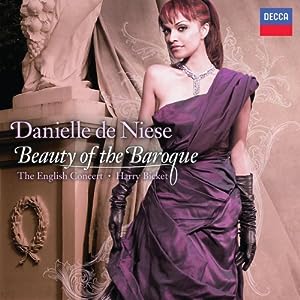 Danielle de Niese’s third Decca album, Beauty of the Baroque is released as the soprano stars in the world premiere of Enchanted Island at the Metropolitan Opera

With her third solo album, soprano Danielle de Niese embodies the Beauty of the Baroque with an album of treasured arias from the English, German, and Italian traditions to be released by Decca on January 10th, 2012. She is accompanied by leading European Baroque orchestra, The English Concert under Harry Bicket, a conductor whom De Niese calls “a musician’s musician” who “gives you wings to fly.” Danielle de Niese is also joined by renowned countertenor Andreas Scholl for duets including Monteverdi’s ravishing duet “Pur ti miro.” The album, already released in the UK in summer of 2011, has garnered four star reviews, and was hailed by The Independent, The Sunday Times and The Telegraph praising de Niese’s “vivacity and fresh-toned sweetness” and describing the program as a “charming recital that shows this popular soprano at her best." Beauty of the Baroque follows de Niese’s award-winning Decca debut of Handel arias released in 2007 and the Mozart album which came out to 2009 to critical and audience acclaim.

The Australian-American soprano Danielle de Niese grew up singing Purcell and Bach and as a teenager seeking out music suited to her youthful instrument, she was attracted to the melodic beauty and the orchestral sparseness typical of the Baroque style. So this is repertoire both beloved and deeply familiar to the soprano. On this album, the most celebrated arias like Handel’s “Ombra mai fu” and excerpts from from Bach’s "Wedding Cantata" are contrasted with intimate melodies by Purcell and Dowland, as well as much loved Italian songs and sacred works by Monteverdi and Pergolesi.

On December 31st, Danielle de Niese bows at New York’s Metropolitan Opera starring as Ariel in the world premiere production of Enchanted Island, a ground-breaking new Baroque pastiche opera with music by Handel, Vivaldi and Rameau. The original libretto is drawn from Shakespeare by Jeremy Sams and the opera will be conducted by William Christie. De Niese will perform alongside Plácido Domingo, David Daniels and Joyce di Donato. On January 23rd, de Niese will perform repertoire from Beauty of the Baroque at New York’s (Le) Poisson Rouge in the West Village. After her Met engagement concludes, Danielle de Niese heads out to Southern California to make another big role debut, starring as Norina in Donizetti’s Don Pasquale at the San Diego Opera, opening March 10th.