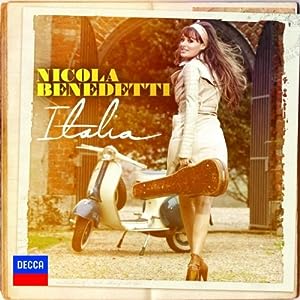 “…a lively celebration of Benedetti’s Italian roots, shot through with some laser-sharp pyrotechnics…” – BBC Music Magazine

The album includes both popular highlights of the baroque repertoire as well as some overlooked gems. Benedetti includes one concerto from Vivaldi’s enduring masterpiece, The Four Seasons, as well as Tartini’s Devil’s Trill. In addition the generous selection ranges from the sparkling virtuosity of the opening Vivaldi Concerto Grosso Mogul, to the poignant lament of the Veracini Largo and the lyrical beauty of the two arrangements of Vivaldi vocal works, including the haunting Nulla in mundo pax sincera, and an additional concerto by Tartini.

In her previous recordings Benedetti has concentrated principally on mainstream Roman­tic concertos. Turning to the baroque era involved a new way of thinking, not just about the music, but also about the violin technique appropriate to play it. The issue of baroque style has evolved dynamically over the past three decades or so, and for Benedetti it was essential to find an approach that would feel true to her inner convictions, as well as suiting current trends regarding historical accuracy.

“I started studying baroque playing about three years ago, mostly in Bach,” she says, “and to get to grips with the style I played a few early Italian and French sonatas, but at first I felt I needed more time. ‘Early music’ is such a difficult world to enter – for a long time it seemed that there were so many rights and wrongs: ‘This style is correct, that style isn’t’ ... But today this is one of the areas of performance that is in fact the most free. There has been so much diversity in the way people have performed the music that we’ve almost arrived at a point – at least in the UK – where many different approaches are accepted.”

Nicola Benedetti will be performing: