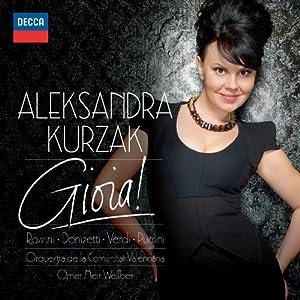 Aleksandra Kurzak says that the title of her new recording Gioia! – in English, “joy” – was actually her agent’s spontaneous idea: “He said that he can see the joy on my face when I’m singing. I’ve also heard from fans that listening to me sing makes them smile, because they can tell how much I enjoy performing. On this album, there is also joy in the music and in the words. This notion of “gioia” comes up in many arias, like Violetta’s and Susanna’s, which I sing and love. And this is just what I’ve been feeling about this recording. The joy in the music and my enjoyment of singing go hand in hand.”


Gioia! is released on the heels of several stellar turns in opera houses around the world including Royal Opera House, La Scala and the Metropolitan Opera for which Kurzak has been unanimously praised. The New York Times has called Kurzak “alluring” and praised her ”luminous, impressively focused and agile coloratura voice,” while the Observer (London) dubbed her “a rising-star soprano with flashing eyes and cover-girl looks.” Reviewing the soprano’s recent performances in Lucia di Lammermoor in Seattle, Opera stated: “It was as if the heady days of the Bel Canto Revival, with Sills, Sutherland and Callas, were back again, eerie and unforgettable.” That Bel Canto gift is fully on display on Gioia! with the soprano performing bel canto favorites (Bellini’s I Puritani, Rossini’s Il Barbiere di Siviglia) as well as lyric arias from La Traviata and La Bohème. Kurzak even includes an aria in her native Polish from Moniuszko’s The Haunted Manor.
Opera Recording Voice