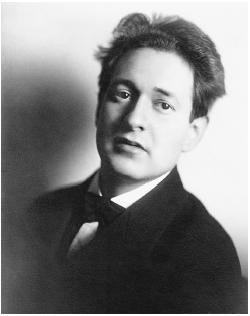 My previous post speaks about a new CD of Erich Korngold's Violin Concerto. But in the last month I have also seen the following Korngold activity:

Erich Korngold was born in Austria-Hungary and is typically remembered for his film scores, Captian Blood (1935), The Prince And The Pauper (1937), The Adventures of Robin Hood (1938) and The Sea Wolf (1941), to name a few. However, prior to moving to Hollywood, Korngold had success in Europe with his opera Die tote Stadt (1920).

His Violin Concerto (1945) is considered by many to be one of the best examples of a 20th century violin concerto. The music is lush and romantic and yet, challenging and thoughtful. While the reviews of the premiere in 1947 by Jascha Heifetz label Korngold "a Hollywood composer" in an attempt to be derogatory, he was not only integral in creating the sweeping Hollywood sound of the 30's & 40's, but wrote a vast number of classical works as well.

Erich Wolfgang Korngold died in 1957 thinking himself a forgotten composer. It's nice to see his music is once again getting performed, recorded and enjoyed.

Anonymous said…
I just wanted to make a correction. The Violin Concerto was performed by Lara St. John at the Waukesha Symphony Orchestra January performance. Jascha Heifetz is a virtuoso from the mid 1900s.
February 4, 2009 at 11:54 AM