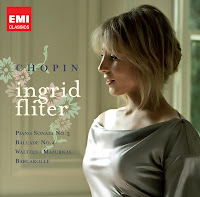 “Clearly born for Chopin, her playing is a marvel of the most refined fluency and affection …. Fliter will make lesser pianists wonder at her effortless musical grace and unfaltering command,” - Gramophone on Ingrid Fliter’s debut album for EMI Classics

Following universal praise for her EMI Classics debut album of Chopin piano works, Gilmore Artist Award winner Ingrid Fliter has recorded the composer’s complete waltzes for release as the music world prepares to celebrate his 200th birthday in 2010. The Mazurka No. 42 in F minor (Op. 63 No. 2), will be available as an exclusive iTunes bonus track.

Ms. Fliter, the silver medal winner at the Frederic Chopin Competition in Warsaw in 2000, names Chopin as the composer who speaks most clearly to her: “[His music] is like looking into a kaleidoscope of human life. He concentrates all his ideas, all his creative energy, in a very short space of time. He creates a whole world in each little piece.”

“It wouldn't be an overstatement,” continues Ms. Fliter, “to say that if it had not been for Chopin's music I would not have been born. My mother noticed my father for the first time while he was playing some Chopin waltzes during a party! I have a vivid memory of being a child and of Chopin’s music, performed by Arthur Rubinstein, playing everywhere - in the living room, in the kitchen, in the car. So I grew up loving Chopin's music and accepting it as part of my everyday life.

“One of the most difficult things to achieve while playing Chopin’s music is a good balance between his romantic soul and his classical expression. Through years of study, I have been touched to discover his darker side, his sense of the tragic, which plays a fundamental role in his music, as much as the ‘joie de vivre’ does. When I play Chopin, I have the feeling that the public reacts with a breath of satisfaction, saying ‘Ah, Chopin!’ What I hope every time I play this music is that I can keep the freshness.”

Today Ingrid Fliter performs Chopin regularly, both in recital and with orchestra: “[Her] Chopin group was simply spellbinding. The music seemed to flow from her with an utterly natural lyrical impulse, graced with power, luminous delicacy and a spectrum of tonal coloring that combined to mark her out as one of the most instinctive and eloquent Chopin interpreters playing today.” (Daily Telegraph); “Yes, there was a rich sweetness to Fliter's playing … but plenty of fibre and muscle as well. Not for nothing has Fliter been compared to her great compatriot Martha Argerich: there's a similar vitality, an engaging restlessness that imbued some of Chopin's most dreamy sub-plots with enough snappiness and tang to keep us on our toes.” (The Times)

Ingrid Fliter was born in Buenos Aires in 1973 and began her piano studies there. She gave her first public recitals at the age of eleven and made her professional debut with orchestra at the Teatro Colón at the age of 16. In 1992, she moved to Europe, where she continued her studies in Freiburg, Rome and Imola. Already the winner of several competitions in Argentina, she went on to win prizes at the Cantu International Competition and the Ferruccio Busoni Competition in Italy and at the Frederic Chopin Competition in Warsaw.

The international spotlight focused on Ingrid Fliter when she was named the recipient of the prestigious 2006 Gilmore Artist Award, made every four years by an anonymous panel of judges who assess a number of pianists over a period of time without their knowledge. The Gilmore Artist Award is made to an exceptional pianist who, regardless of age or nationality, possesses broad and profound musicianship and charisma and who desires and can sustain a career as a major international concert artist. The four previous Gilmore Award winners have included EMI Classics artist Leif Ove Andsnes (2002) and Virgin Classics’ Piotr Anderszewski (1998).

Ingrid Fliter performs extensively with major orchestras and in recital in North and South America, Europe Asia and the Middle East. Her autumn 2009 recitals in, among others, Boston, Milan and London’s Wigmore Hall, feature an all-Chopin second half, including a group of waltzes. Her winter/spring 2010 recital programme for performance in, among others, New York, Michigan and Chicago’s Orchestra Hall, has an all-Chopin first half, including waltzes. Ms. Fliter appears with orchestras on both sides of the Atlantic in 2009-2010 in concertos by Chopin, Beethoven, Ravel, Mozart and Haydn. She performs Chopin’s Piano Concerto No. 1 with the Cincinnati Symphony and the Royal Liverpool Philharmonic Orchestra/Vassily Petrenko and his Piano Concerto No. 2 with the Cleveland Orchestra/Vladimir Ashkenazy and the Austin, Nashville and Toronto symphonies.

In September 2007, Ingrid Fliter joined the roster of BBC Radio 3’s New Generation Artists scheme for a period of two years during which she appeared with many of the BBC’s orchestras and participated in some of the UK’s most prominent festivals, including the City of London Festival and the BBC Proms. This CD is produced in collaboration with BBC Radio 3's New Generation Artists scheme.

Ingrid Fliter is an exclusive EMI recording artist. On the release of her first CD in 2008, The Telegraph wrote, “The warmth of her playing and the lyrical impulse of her interpretations are combined with discretion in matters of dynamics, pianistic decoration and tonal colour to make these pieces flow from her fingers with the spontaneity of someone deeply immersed in the music's idiom.”