Showing posts from March, 2008
Show all

By Chip Michael - March 25, 2008
Popular classical music is rather an odd beast. People's tastes change from year to year, and yet there always seems to be camps of supporters for each style of music - so some tastes don't necessarily change with the season. There are those that say radio stations like Classical FM cater to boring or conservative tastes. However, it runs a survey every year to catch a glimpse as to what their listeners think are the best 300 pieces of classical music out today. Music from Mozart and Beethoven continue to rank highly among the most favourite pieces to listen to. That said, these same composers are the bread and butter for professional orchestras as well. While it may be nice to perform something new and different, the crowds still are better for music from the masters. Since it takes money to keep these organisations running, performing concerts that sell tickets is a necessity - and so the master's music continues to get performed. What is also interested about the above
Post a Comment
Read more

By Chip Michael - March 17, 2008
Occasionally something new appears in opera, and not just a new production of the standard repertory, or even something new but someone establish. Scottish Opera , under the direction of Alex Reedijix, produced a series of five operas, all fifteen minutes in length, written by composers and librettists who come from backgrounds other than opera - which included Craig Armstrong (numerous film scores), Ian Rankin and Ron Butlin (notable authors). The Telegraph gave their review . I can't say I agree with all of Ruperts comments, but certainly I agree that Gesualdo was the highlight of the evening's performance. This portion of the programme was a collaboration of Craig Armstrong and Ian Rankin and really played to Craig's strengths. The music was powerful, lending both atmosphere and melody to the piece. Rhythms played a strong roll in the opening scene, and yet at other times completely transparent, allowing the emotions of the words to come through. The chamber ensem
Post a Comment
Read more

The Universal pause implied by an ...

By Eddie Louise - March 12, 2008
Writing an opera is an amazing process involving alot of back and forthing between Librettest and Composer. Some of this discourse is inventive and invigorating. Some is angry and territorial. Some is just silly... Said I: You missed the point! She pauses there! Said He: What do you mean, pauses? She is on a roll. This is a declamatory moment. Said I: There! There! By the three dots thingy... oh what's that called again? It isn't important... but they DEFINATELY mean pause! Said He: An ellipsis? Said I: That's it! It means pause! Said He: Actually it means: ' the series of three dots (periods) in a row that indicates a word or phrase has been omitted.' Said I: Well. Yeah. But in the international language of librettists that are writing lyrics at 3 am in the morning... it means pause!! Said He: But... listen to this incredible flowing lyric line I've composed... a pause would interrupt that... Said I: Oh... Sai
1 comment
Read more

The Genesis of an Opera 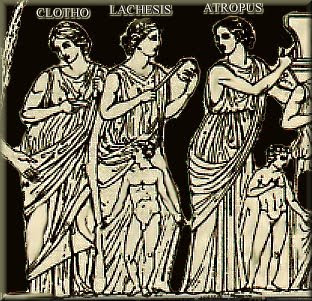 Composer Chip Michael and I had decided we wished to produce an Opera together; something fresh, vital, modern and exciting! We knew that we wanted the rhythms of the story to resonate with modern life, and yet to hold historic truths and be truly indicative of human nature both past and present. Every good story begins with the "What if..." and the story of an opera is no different. In our particular case the What if sprung from the realization that of the entire pantheon of the Greek Gods, Fate is the last one standing. No one swears by Apollo any more, or prays to Zeus, but people all over the world still refer to their fate, greeting dramatic events with a fatalism that has changed little since the days of ancient Greece. So... What if... the Fates looked up from their weaving one day and realised they were the last Gods standing? Enter Chorus: "It wasn't always like this. This. I mean the cave, the weaving. Fate didn't always take these three aspects, h
1 comment
Read more 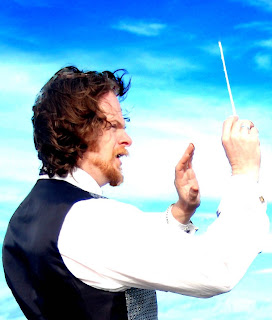 ...from concept to concert photo by Clare Martin When I was much younger, playing trombone in high school in Wyoming, I dreamt I would one day write a symphony. However, life often interjected and steered me through a variety of different paths, from fatherhood, to military service and to software engineering - only to eventually end up studying music again, this time in Edinburgh. Well, the dream is now a reality; the finishing touches to Figuratively Speaking are done, the parts are being prepared and a concert has been set for June 4th, 2008. The overall piece is a collection of cliche' which are "translated" into musical terms, figures of speech with the orchestra as the metaphor. Initially, two years ago, I wrote the first movement thinking this would be a standard four movement symphony. The first movement, The Road goes both ways felt like a nice beginning. The concept, a single motif manipulated to the point it "goes both ways" and then some, real
2 comments
Read more