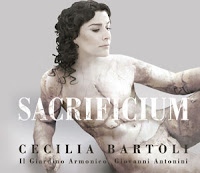 New York, NY - Celebrated vocalist Cecilia Bartoli has found artistic inspiration in one of music history’s most fascinating—and cruel—subjects: the castrati of the Baroque era. Constantly challenging herself and her fans by recording virtually unknown repertoire, Bartoli continues to carry the art form to new aesthetic and intellectual heights. Her new album, Sacrificium, is no exception: featuring 11 world-premiere recordings, the disc will be available on the Decca label on October 27th, 2009. To celebrate the release, (le) poisson rouge in New York City will host a special film screening of Bartoli's recent performance of the music of Sacrificium at the Castera Palace in Naples, Italy. This free event will take place on November 16, 2009 at 7:30 pm.

"The age of the castratos was one of the most dazzling and remarkable in European music history," writes Bartoli. "Seldom has there ever been such a complete fusion of sensuousness and splendor, form and content, poetry and music, and, above all, such a perfection of vocal virtuosity, as was achieved in the glory days of the Baroque era. The legendary art of the castratos continues to exert its fascination even today, and despite the great human sacrifice it exacted, a new assessment of this extraordinary period is surely justified." Sacrificium marks the first collaboration of Il Giardino Armonico, Giovanni Antonini, and Bartoli since their Grammy Award-winning The Vivaldi Album ten years ago. The arias on the album are drawn from the works of Nicola Porpora (1686-1768), Antonio Caldara (c. 1670-1736), Francesco Araia (1709-1770), Carl Heinrich Graun (c. 1703-1759), Leonardo Leo (1694-1744), Leonardo Vinci (1696-1730), Riccardo Broschi (c. 1658-1756) and Geminiano Giacomello (c. 1692- 1740).

The arias Bartoli has chosen were written specifically to showcase the incredible skill and ethereal voices of the castrati, young boys castrated before puberty to maintain their soprano voices. Sacrificium laments as much as celebrates what these boys sacrificed in the name of art. The comprehensive album package will feature 100 minutes of diverse and splendid tracks, as well as a 100-page illustrated A to Z of the Castrati. Cecilia Bartoli’s goal is to drop the listener into this harsh, beautiful world of the Baroque. "In order to recreate the sound of [the castrati] for today’s listeners, we must resort to a little theatrical trickery," says Bartoli. She adds, however: "Even in the heyday of the great castratos, it was widely held that female singers, with their particular vocal capabilities, were worthy competitors."

Bartoli is certainly a worthy competitor. Her voice and artistry have sold 6 million CDs, capturing the hearts of countless opera lovers and casual listeners alike. She is known to sell out prestigious concert halls all over the world, most recently New York's Carnegie Hall last spring. Her awards include multiple Golden Discs, four Grammys, seven Echos, and the Victoire de la Musique. She has been given Italian knighthood, solidifying her role as one of Rome’s favorite daughters. She will tour the repertoire of Sacrificium throughout Europe in the 2009-2010 season.