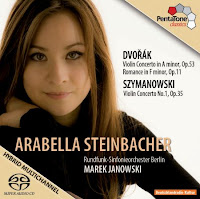 New York, NY—Munich-based, twenty-seven-year-old violinist Arabella Steinbacher has signed an exclusive recording contract with PentaTone Classics. Her first album with the label includes Dvořák’s Violin Concerto in A Minor and Szymanowski’s Violin Concerto No. 1, as well as Dvořák’s Romance in F Minor. Ms. Steinbacher joins forces with the excellent Rundfunk-Sinfonieorchester Berlin led by Marek Janowski. The super audio CD will be released in the UK on 12 October 2009 and in the US on 27 October 2009.

Fresh from her July 2009 BBC Proms debut with the Bamberg Symphony Orchestra, Ms. Steinbacher will perform Beethoven’s Violin Concerto in D Major, Op. 61 in her debut with the London Symphony Orchestra, conducted by Sir Colin Davis at 7:30pm on Thursday, 8 October 2009 at Barbican Hall. In November, she will tour Germany with the Philharmonia Orchestra under Lorin Maazel, followed by a 1 December 2009 concert with the orchestra at Royal Festival Hall in London.

It was Beethoven’s Violin Concerto that launched Ms. Steinbacher’s international career when she stepped in on short notice for an ailing colleague to perform the piece with Orchestre Philharmonique de Radio France led by Sir Neville Marriner in Paris in 2004. Since then, she has firmly established herself on the concert scene, performing with numerous major orchestras. Ms. Steinbacher’s diverse repertoire includes more than twenty concertos for violin. In addition to all of the major concertos of the Classical and Romantic period, she also performs those of Barber, Berg, Glazunov, Khatchaturian, Milhaud, Prokofiev, Schnittke, Shostakovich, Stravinsky, Szymanowski, and Hartmann.

Born in Munich in 1981 to a German father and a Japanese mother, Ms. Steinbacher began studying the violin at the age of three. Her mother is a professionally trained singer who came to Germany from Japan to study music, and her father was the first Solorepetitor in the Bayerische Staatsoper, from 1960 to 1972. At nine, she became the youngest violin student of Ana Chumachenko at the Munich Academy of Music. She received further musical inspiration and guidance from Ivry Gitlis, whom she still meets regularly in Paris.

Among her numerous recording honors are an ECHO-Klassik Award (considered to be the German equivalent of the Grammy) for Young Artist of the Year, “Les Chocs du Mois” from Le Monde de la Musique, and two German Record Critics Awards. The New York Times reports that she plays with, “Balanced lyricism and fire ….among her assets are a finely polished technique and a beautifully varied palette of timbres.” After her debut with the Chicago Symphony Orchestra, performing the Sibelius Violin Concerto under Christoph von Dohnányi, The Chicago Tribune reported, “From her magical entry over hushed orchestral strings to the biting swagger she brought to the dancing finale, it was evident that her feeling for this music runs as deep as her technical command. The central Adagio came off especially beautifully, Steinbacher conveying its brooding melancholy with a rich vibrato, impeccable intonation and a remarkable breadth of phrasing.”

Other highlights of the 2009-10 concert season include October performances at the Gewandhaus in Leipzig as soloist with the Leipzig Gewandhaus Orchestra under Riccardo Chailly, with a tour of Asia following. In December, she performs with the NHK Symphony Orchestra. In the spring, Ms. Steinbacher performs with the Bayerischer Rundfunk Orchester led by Sir Colin Davis, and will perform again with the Philadelphia Orchestra under Charles Dutoit. During the season, she will also perform with the Russian National Orchestra, the Vancouver and Oregon symphonies, the Orchestre Chambre de Lausanne and the Orchestre de la Suisse Romande, and will give recitals throughout Europe. In the spring of 2011, Ms. Steinbacher will make her Carnegie Hall debut with the Orpheus Chamber Orchestra, and will debut with the Boston Symphony Orchestra.

In 2001, Ms. Steinbacher won the sponsorship prize of the Free State of Bavaria and in the same year she was awarded a scholarship by the Anne-Sophie Mutter Foundation. From Anne-Sophie Mutter, who personally supports her, Ms. Steinbacher received a bow from the master luthier Benoit Rolland. Arabella Steinbacher plays the “Booth” Stradivari (1716) generously provided by the Nippon Music Foundation. Her General Manager is Tanja Dorn at IMG Artists.

About Marek Janowski:
Marek Janowski has been Artistic Director of the Rundfunk-Sinfonieorchester Berlin since 2002 and in 2005 he was also appointed Musical Director of the Orchestre de la Suisse Romande in Geneva. He is in demand as a guest conductor throughout the world, working on a regular basis in the USA with the Pittsburgh Symphony Orchestra (where he holds the Otto Klemperer Guest Conducting Chair), the Boston and San Francisco Symphony Orchestras, the Philadelphia Orchestra, and in Europe with the Orchestre de Paris, the Orchester der Tonhalle Zürich, the Danish National Symphony Orchestra in Copenhagen and the NDR-Sinfonieorchester Hamburg. Born in 1939 in Warsaw and educated in Germany, Marek Janowski’s artistic path led him from Assistant positions in Aachen, Cologne, Düsseldorf and Hamburg to his appointment as General Music Director in Freiburg im Breisgau (1973-75) and Dortmund (1975-79). Whilst in Dortmund, his reputation grew rapidly and he became greatly involved in the international opera scene. There is not one world-renowned opera house where he has not been a regular guest since the late ‘70s, from the Metropolitan Opera New York to the Bayerischer Staatsoper Munich; from Chicago and San Francisco to Hamburg; from Vienna and Berlin to Paris.

Marek Janowski stepped back from the opera scene in the 1990s in order to concentrate on orchestral work and was thus able to continue the great German conducting tradition in the symphonic repertoire. He now enjoys an outstanding reputation amongst the great orchestras of Europe and North America. He is recognized for his ability to create orchestras of international standing as well as for his innovative programs and for bringing a fresh and individual interpretation to familiar repertoire.

Between 1984 and 2000, as Musical Director of the Orchestre Philharmonique de Radio France, Marek Janowski led the orchestra to international fame as the leading orchestra in France. From 1986 to 1990, in addition to his work in France, Janowski held the position of Chief Conductor of the Gürzenich-Orchester in Cologne, and between1997 and 1999 he was also First Guest Conductor of the Deutsche Symphonie-Orchester Berlin. From 2000 to 2005 Janowski served as Music Director of the Orchestre Philharmonique de Monte-Carlo, and from 2001 to 2003 he also held the position of Chief Conductor with the Dresdner Philharmonie.