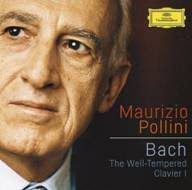 New York, NY (October 27, 2009) – World-renowned pianist Maurizio Pollini releases his first-ever recording of Bach on Deutsche Grammophon, available November 17, 2009. With a career that has already spanned almost 50 years (he was awarded first prize in the 1960 Chopin competition), Pollini continues to challenge himself both on stage and in the recording studio.

Recording a composer for the first time is always a milestone, recording a composer for the first time after performing for almost 50 years is a unique milestone, and when that composer is Bach and the pianist is Pollini the recording becomes a major event. This project, a summit meeting of two masters, has been in the making for decades. Pollini has regularly performed Bach and specifically selections from The Well-Tempered Clavier for more than twenty years in concert but has only just now chosen to record this landmark work and composer.

The impact of Bach’s work is well known, not only to musicologists but also most anyone who has ever taken a piano lesson. The Prelude in C is universally known for its simplicity and beauty and Schumann even made the recommendation to “let the ‘Well-Tempered Clavier’ be your daily bread” in 1850, over 100 years after Bach’s book was compiled. Not only are the preludes and fugues in every major and minor key great exercises for any keyboard player, but they are also brilliant little works of surprising genius and wit.

The preludes take on a number of different characteristics and styles throughout, from arpeggios to inventions to toccata-like works. The fugues demonstrate Bach’s unique gift for combining melody, structure and counterpoint. Taken as a whole, they demonstrate many different techniques and contrapuntal procedures and range from rigorously formal to more freely composed. Of the 24 fugues, eleven are in three parts, ten in four, one in two, and two for five voices.

With few selections lasting over four minutes, and most averaging only two, each piece is a jewel of ingenuity. Though each is a small delight when enjoyed alone, the summation of The Well-Tempered Clavier is a feast for the ears. Pollini is no stranger to tackling iconic works and bringing his unique insight to every style of music. The winner of two Grammy® awards (1979 for Bartok and 2006 for Chopin), he is internationally regarded as one of today’s premiere pianists and has remained both an audience and critical favorite for close to 50 years. Though it has been a long time coming, some recordings are well worth the wait.