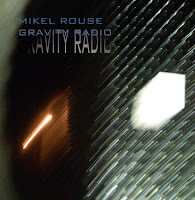 New York, NY – Composer, filmmaker, director and solo performer Mikel Rouse celebrates the release of his latest album, Gravity Radio (Exit Music 1012) with a special performance at Galapagos Art Space (16 Main Street, Brooklyn) on Friday, October 23 at 8pm. Mr. Rouse will be joined onstage by his band and special guests ACME (American Contemporary Music Ensemble) and TONY nominated/OBIE Award winner Veanne Cox. New work by acclaimed video artist Cliff Baldwin will be projected throughout the performance. The release date for Gravity Radio is November 3 (on iTunes and at all major retailers) but the disc will be available for purchase at Galapagos.

Mikel Rouse has spent his successful and varied career creating music and multimedia projects that marry simplicity and intricacy. Gramophone reports, “We have Rouse’s works as living proof that complexity need not keep listeners at a distance, and that pop music can sustain serious interest with the right person at the helm.” Mr. Rouse has finely honed his ability to defy genres with his “avant-rock” music, infusing his work with sincere melody while basing it on strict and complex idioms. The result is music that is infectious from the first hearing, and which grows more engaging and cerebral thereafter.

Of the new album Rouse says, “Perhaps it (Gravity Radio) is an attempt to recapture or update my first memory of radio in the late 1960s – Motown and British rock fading in from a faraway Chicago station as the local news faded out on my transistor radio, which I put between my head and the pillow late at night.”

Actual AP Newswire reports are recited by Ms. Cox throughout Gravity Radio. These reports are scattershot, reflecting aspects of current events and society as reported on the news. Included are stories from the Iraq war, the statistics for cell phone usage, plastic surgery, professional football and the economy. The title Gravity Radio is inspired by physicist Raymond Chiao’s experiments with superconductors and gravity waves – which exist in theory but have eluded detection.

Mikel Rouse’s musical and theatrical repertoire has its roots in the high art-meets-popular culture, mix-and-match aesthetic of the early ‘80s downtown Manhattan music and art scene from which he emerged. As the Toronto Globe and Mail puts it, Rouse’s music has brought “comparisons to Laurie Anderson, Steve Reich and occasionally Talking Heads, though Rouse's love of complex rhythmic patterns far exceeds them all. But music is just a part of what he does: His pieces also build a hypnotic effect through their non-narrative approach and the use of surreal film images.” After the premiere of Rouse’s multimedia opera, The End of Cinematics, The New York Times reported, “Sometimes built on heavy, repetitive beats, and sometimes couched in Beatle-esque psychedelia, the songs are vivid, pleasingly visceral and often engagingly harmonized, with amusingly off-kilter lyrics.”

Following the November release of Gravity Radio, Rouse and his 11-piece band will embark on an international tour in January 2010. The live performance of the song cycle will incorporate multichannel video representing a visual kaleidoscope of earthbound images. The AP Newswire reports and the written commentary that highlights the connections between the song lyrics and the reports will be customized for each performance, taken from that day’s local and national news. The Gravity Radio tour begins in New Orleans at the Contemporary Arts Center on January 23, and will include performances in New York, Illinois, North Carolina, Toronto, Ireland and Spain.