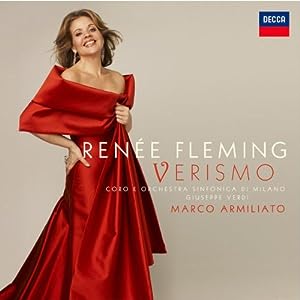 Renée Fleming’s new CD Verismo has already received rave reviews. It opened at the top of the charts when first released. So, this review of her newest release may be a bit late (and even superfluous). However, it is a beautiful album and not commenting on the quality seems a shame. Listening to Verismo is like falling in love with Puccini’s music all over again (and again and again). There other composers from the givane scuola (young school), but it is Puccini who really dominated this period of opera and justifiably dominates the tracks on Fleming’s new album.

Verismo refers to the post-Romantic Italian operatic tradition of composers such as Pietro Mascagni, Ruggiero Leoncavallo, and Giacomo Puccini, who advocated bringing the naturalism of writers such as Emile Zola and Henrik Ibsen into opera. These are operas whose emotional impact is as much in your face as layered with complexity. True to tradition, the arias on Verismo are just that, complex layers of emotion with a searing edge of power. There are a surprising number of detractors who feel Renée Fleming is not up to the task, or that perhaps she has belied the Verismo tradition by including the more popular Puccini operas of La bohème and La rondine. I can only feel they have not really listened to the CD. These are wonderful versions of beautiful music.

What is even more enticing about Verismo is the wealth of rarely heard pieces Ms Fleming included in this recording along side the more recognizable arias. Ms Fleming said, “I was surprised by the sheer volume and variety of the Italian operas from this period, and the intense emotionality of the music…” Although Manon Lescaut is not unknown, but here we are treated to a delightful original manuscript version of Sola, perduta, abbandonata!. It runs the full gambit of emotions from tender strings and harp setting the stage where the title character is feeling lost and abandoned to anguish and fear of death. Ms Fleming’s voice is both commanding and vanquished, leaving the listener a chance to feel every moment.

Beyond several Puccini arias are selections from operas by Mascagni, Catalani, Leoncavallo, Zondonai, Celea, and Giordano. From the delightfully spicy ler dalla fabbrica a Triana from Conchita to tender love song of No! Se un pensier from Siberia. The breadth of styles is incredible. The only time the album doesn’t completely entrance the listener is during Angioletto, il tuo nome? from Zazà. It felt a bit stilted. This isn’t to say that Ms Fleming’s voice is anything but spectacular – but that the track doesn’t live up to the rest of the brilliance of Verismo.

Each aria is delightful, emotionally rich and full of life. I highly recommend Verismo to anyone who has ever enjoyed an opera. The music is exquisite, and the performances absolutely first rate. Renée Fleming is the Diva of our age and this is more than ample proof just how very good she is.